Let the serene atmosphere of Ancient China soothe your senses as you spin the golden reels of this deluxe game. Meet the game’s enthusiastic main character, Cai Shen, who is here to offer you companionship and joy as he celebrates your wins with you! This 6-reel, 5-row slot is filled with instantly recognizable Asian symbols and golden fortunes to be won. Plus, the features bring a whole new level of excitement to the game!

Expanding Wild: Your grinning host, Cai Shen, is the game’s Wild symbol. The Wild expands to cover three positions every time it lands on the reels and substitutes for all other symbols (except the Scatter). It can land as many as three times on the reels (though not adjacent to each other) during the main game, which means could score amazing winning combos!

Free Games: You can trigger up to 88 Free Games with the gold ingot Scatter symbol! When you land six Scatters you’ll be awarded this exciting prize. But there’s more opportunities where that came from; if just three Scatters appear you’ll get 8 Free Games, four Scatters gives you 18 Free Games, and five Scatters gives you 28 Free Games! During this Free Games round the Wild appears twice on every spin. Plus, at the start of any Free Game, between 3 – 24 symbols on the screen will change into random high-value symbols meaning the chance of landing a high-value prize is even greater!

28 Paylines: This slot features 28 paylines that offer winnings both horizontally and vertically; so, any horizontal or vertical line of the same symbol can land you a prize! Winning paylines potentially overlap or intersect, and a single row can contain more than one win!

So journey back to Ancient China with Cai Shen and spin these luxurious reels for the chance to win a golden fortune. 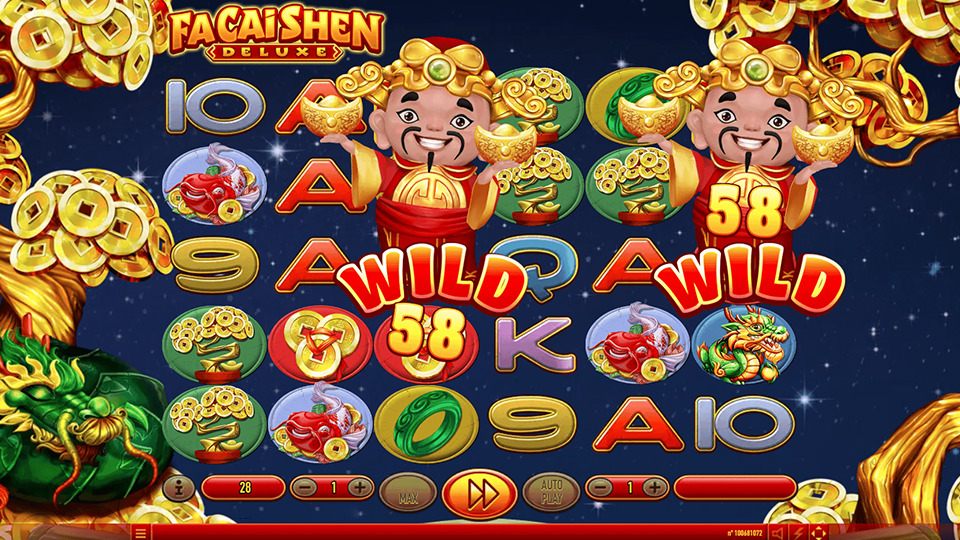